OUTRAGE IS CONTAGIOUS...CATCH IT HERE AND BECOME A CARRIER... » 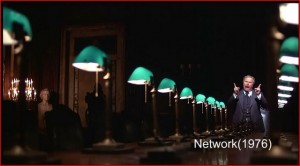 A 13 min. clip from the film Network…

To watch the 13 min. film clip streaming on Firefox or Chrome browser in a New Tab [click here]

Even if you have seen it before, I would recommend watching it again. A Great American Classic…

A  brilliant scene which distills and delivers the moral payload of the film: the sociopathology of world domination by the Mega-corporations of Capitalism.

After attempting to prevent a corporate merger by exhorting his television viewing acolytes to write their congressman to protest and scuttle the merger, Howard Beale(Peter Finch) has been called into the corporate offices of the network to receive the message of the Gospel of Capitalism delivered chapter and verse from the President of the Corporation Arthur Jensen(Ned Beatty):

An enormous office with two walls of windows towering over the Manhattan landscape and through which SUNLIGHT streams in. Arthur Jensen is rising from behind his massive desk.

JENSEN
Good afternoon, Mr. Beale. They tell me you’re a madman.
CAMERA DOLLIES to include Howard just coming into the room.

HOWARD
(closing the door behind himself)
Only desultorily.

JENSEN
How are you now?

JENSEN
Who isn’t? Don’t sit down. I’m taking you to our conference room which seems more seemly a setting for what I have to say to you.
He takes Howard’s arm and moves him to a large oaken door leading out of Jensen’s office.

JENSEN
I started as a salesman, Mr. Beale. I sold sewing machines and automobile parts, hair brushes and electronic equipment. They say I can sell anything. I’d like to try and sell something to you.

They pass into:
INT. THE CONFERENCE ROOM – C.C. AND A. BUILDING

He leads Howard down the steps to the floor level, himself ascends again to the small stage and the podium. Jensen pushes a button, and the enormous drapes slowly fall, slicing away layers of light until the vast room is utterly dark. Then, the little pinspots at each of the desks, including the one behind which Howard is seated, pop on, creating a miniature Milky Way effect. A shaft of white LIGHT shoots out from the rear of the room, spotting Jensen on the podium, a sun of its own little galaxy. Behind him, the shadowed white of the lecture screen. Jensen suddenly wheels to his audience of one and roars out:

JENSEN
You have meddled with the primal forces of nature, Mr. Beale, and I won’t have it, is that clear?! You think you have merely stopped a business deal that is not the case! The Arabs have taken billions of dollars out of this country, and now they must put it back. It is ebb and flow, tidal gravity, it is ecological balance! You are an old man who thinks in terms of nations and peoples. There are no nations! There are no peoples! There are no Russians. There are no Arabs! There are no third worlds! There is no West! There is only one holistic system of systems, one vast and immane, interwoven, interacting, multi-variate, multi-national dominion of dollars! petro-dollars, electro-dollars, multi-dollars!, Reichmarks, rubles, rin, pounds and shekels! It is the international system of currency that determines the totality of life on this planet! That is the natural order of things today! That is the atomic, subatomic and galactic structure of things today! And you have meddled with the primal forces of nature, and you will atone! Am I getting through to you, Mr. Beale?
(pause)
You get up on your little twenty-one inch screen, and howl about America and democracy. There is no America. There is no democracy. There is only IBM and ITT and AT and T and Dupont, Dow, Union Carbide and Exxon. Those are the nations of the world today. What do you think the Russians talk about in their councils of state Karl Marx? They pull outtheir linear programming charts, statistical decision theories and miniMax solutions and compute the price-cost probabilities of their transactions and investments just like we do. We no longer live in a world of nations and ideologies, Mr. Beale. The world is a college of corporations, inexorably determined by the immutable by-laws of business. The world is a business, Mr. Beale! It has been since man crawled out of the slime, and our children, Mr. Beale, will live to see that perfect world in which there is no war and famine, oppression and brutality. One vast and ecumenical holding company, for whom all men will work to serve a common profit, in which all men will hold a share of stock, all necessities provided, all anxieties tranquilized, all boredom amused. And I have chosen you to preach this evangel, Mr. Beale.

HOWARD
(humble whisper)
Why me?

JENSEN
Because you’re on television, dummy. Sixty million people watch you every night of the week, Monday through Friday.
Howard slowly rises from the blackness of his seat so that he is lit only by the ethereal diffusion of light shooting out from the rear of the room. He stares at Jensen spotted on the podium, transfixed.

HOWARD
I have seen the face of God!
In b.g., up on the podium, Jensen considers this curious statement for a moment.

NARRATOR
That evening, Howard Beale went on the air to preach the corporate cosmology of Arthur Jensen.

Nomination and award were posthumous. Finch became the first posthumous winner in an acting categorary.