I’m mad as hell…and I’m not going to take this anymore! 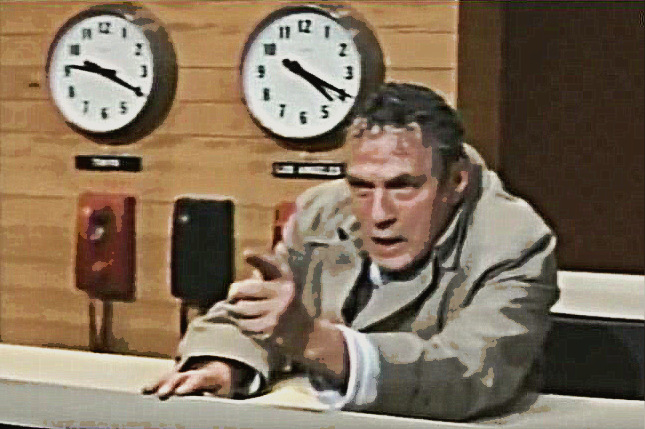 “I’m mad as hell…and I’m not going to take it anymore!”

To view the 5 min. clip on You-Tube “I’m mad as hell…and I’m not going to take it anymore!” 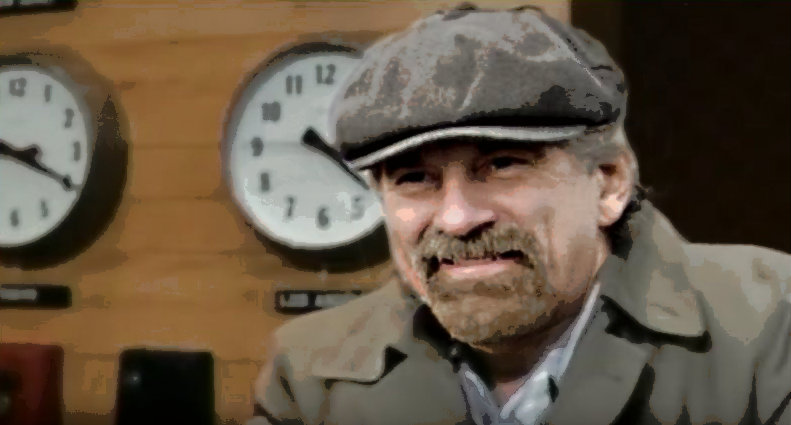 Hunter Beale, Howard Beale’s not-so-kinder, gentler son…caught in a rare lighthearted moment….BUT STILL MAD AS HELL, who is carrying on his father’s work with even more ferocity…of fighting the international mega-corporations and collective world-wide insanity of apathy to climate change.

“I’m mad as hell…and I’m not going to take this anymore!” the immortal clarion call of Howard Beale from the prescient, and never more relevant 1976 film Network brilliantly written by Paddy Chayefsky, directed by Sidney Lumet.

Howard Beale is a central character from the film Network (1976). He is played by Peter Finch, who won a posthumous Oscar for the role.

In the film, Beale, the anchorman for the UBS Evening News, on the fictional UBS television network, struggles to accept the ramifications of the social ailments and depravity existing in the world he reports on; rather than give him the psychiatric assistance that some (like his friend Max Schumacher) believe he needs, his producers use him as a tool for getting higher ratings.

“I’m as mad as hell, and I’m not going to take this anymore!” ranks as one of the most memorable scenes in film history, the line made #19 on the American Film Institute’s list of 100 great movie quotes.

Here’s the brilliantly written scene, a chillingly prescient excerpt from the 1976  film Network, which distills and delivers the moral payload of the film: the sociopathology of world domination by Mega-corporations of Capitalism:
<click> TO VIEW THE SCENE FROM THE MOVIE NETWORK AND VIEW THE SCREENPLAY TEXT IN ANOTHER BROWSER TAB

following video to jump start the process of restoration…

DO YOU HAVE FEELINGS OF INADEQUACY?

“To get out of the mess we’re in, we need a new story that explains the present and guides the future, says author George Monbiot. Drawing on findings from psychology, neuroscience and evolutionary biology, he offers a new vision for society built around our fundamental capacity for altruism and cooperation. This contagiously optimistic talk will make you rethink the possibilities for our shared future.”

Visit TED.com to view this short video (RT: 15 min) for an inspirational uplifting discussion on a new vision for society built around our fundamental capacity for altruism and cooperation.

IN A TIME OF NATIONAL DARKNESS AND DESPAIR, SHINES THE BRIGHT BEACON OF ART…

ART AS A POWERFUL AGENT OF SOCIAL CHANGE
or
HOWARD BEALE LIVES ON!

An essay by Michael A. Kominsky

Copy and spread the The 4Rs of REVOLUTION logo! 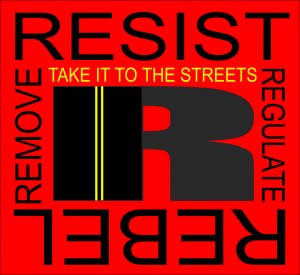 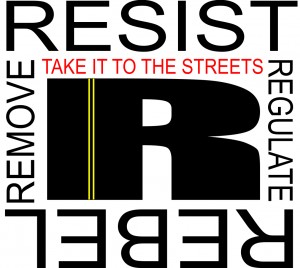 This website is a cautionary parable of man’s indefatigable hubris—the Corpocracy(Rule by Corporations), the worship of industry, technology and oblivious reliance on fossil fuel, despite imperative warnings of 97% of the credible scientific climate community.

The idiot light on the dashboard is now frantically flashing red, admonishing us to shut down the engine of greenhouse gases…before any more irreparable damage is done. It is the redundant replay of the Tragedy…over and over again…of the Greek mythos of Nemesis, (Gr. to pay what is due) divine retribution for man’s hubris blithely allowing the slow systematic Matricide of Gaia.

Tortured and slowly suffocated by a blanket of CO2 at the hands of her own ungrateful children—a deadly irony—with the same slow irrepressible efficiency of the technology that caused it.

The planet and its diverse life forms are in such imminent existential crisis that we no longer have the time or luxury for political…or literary correctness. The time for nuance is long past. It is with this sense of exigency, that I have created this unapologetic website. Given the urgency of the moment, my hope is that one can transcend…and forgive if at times, it rings of excessive moral purpose…and, yes…outrage. 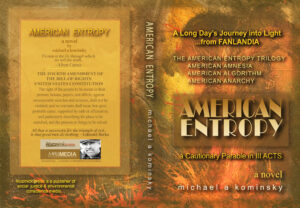 A Cautionary Parable in III ACTS
Available on Amazon.com in Kindle eBook and Trade Paperback

The AMERICAN ENTROPY TRILOGY, is a series of three sequential novels.
The term Entropy is used in the context of a measure of the disorder or randomness in a closed system, in particular, the gradual, not necessarily inevitable, steady deterioration of a system or society to collapse.

This oeuvre of 3 novels, humbly attempts to explore the causes, and possible prevention and cures of an AMERICAN ENTROPY through fictional parable. While as a novel it strives to entertain, it’s primary raison d’ etre, frankly is to inform. It is inspired by the eternal literary verity:

Fiction is the lie through which we tell the truth.
– Albert Camus

AMERICAN AMNESIA          Book 1: 1900 – 2000  443pp – Now available on Amazon.com
The origin of the title AMERICAN AMNESIA, in this context as a metaphor for the failure of contemporary American society to be cognizant and indeed, heed the lessons of history. History is unkind to those those who abandon it, and can be especially unkind to those who make it ignominiously. It traces the history of how American democracy has become the obsequious servant  of unfettered capitalism and neo-liberalism, resulting in colossal and catastrophic  failures of the economy, and irreparable harms done to the middle and working class.

AMERICAN ALGORITHM   Book 2:  2000 – 2004 338pp – Now available on Amazon.com
The origin of the title AMERICAN ALGORITHM, derives from the complete proliferation and increasing predominance of virtually every aspect of distinctly American culture by the computer-driven Digital Age, which utilizes algorithms to instruct the CPU(Central Processing Unit), essentially the brain of every microprocessor controlled device, including computers and “smart phones” etc. The good, the bad and yes, the very ugly of the Digital Age.

AMERICAN ANARCHY         Book 3:  2008 – 2024 Spring of 2022
The title AMERICAN ANARCHY is an avatar to call out, through fictional depiction, the alarming sociological and political pandemic intended to sow discord, divisiveness, and a basic distrust of American governmental institutions. Its primary virulent vector, is unfettered, uncurated and unregulated social media platforms of the internet. It contains scenes of a graphic nature, strong language and depictions of wanton social and political deceit and obfuscation by some very rich, very smart, and very evil people—Evil Geniuses—and their assault on the American democracy.

Admittedly a literary primal scream, it is my hope that in  some small way I may have contributed to an awareness and better understanding of the tremendous positive potential of the internet for promoting socially beneficent innovation, and empowering and promulgating democratic ideals.

But, that it must not go unsaid, it’s well past time to break the glass, sounding a shrill siren, warning  of the long-term pathological consequences of:

The TRILOGY, through fictional depiction, attempts to remind and reinforce the lessons of history, replete with inspirational, courageous acts of heroism, oftentimes against great adversity including extraordinary personal sacrifice and physical harm, to advance the cause of freedom, justice and equality.

So in someways, this is my Russian Novel—a dark, Slavic melancholy morality play, panoramic in scope with lots of characters over an ambitious time line. My contemporary take on Leo Tolstoy’s epic novel “War and Peace”…as may have been told by Mel Brooks.

TO DOWNLOAD A PDF BETA COPY OF ANY OF THE BOOKS

—AT NO CHARGE—UNTIL FURTHER NOTICE…

Had enough? Join us in calling out the bad guys…in the Corpocracy, the Media and the Government!

You can share your comments below, including your personal experience (no profanity please:), however because of the high prevalence of “spambots” you will be required to register and have your user rights approved by the website admin, then each posting will be moderated to further insure there are no commercial/spam entries. You will be notified by email when your account is approved.

We look forward to hearing from you.

Art…as a powerful agent of change…

The spirit of the troubadours of the 60’s lives on.